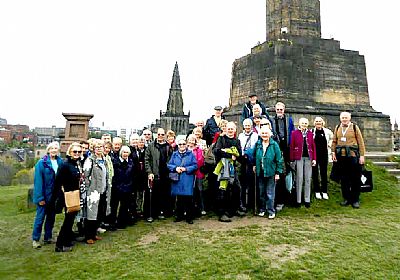 Willis, vice-chair, and Ruth Johnston, chairperson of the Friends of the Glasgow Necropolis.

This ornamental garden cemetery was modelled on the Pere Lachaise cemetery in Paris and our knowledgeable guides imparted  a great deal about the history, the amazing and extravagant architecture of the monuments and mausoleums and also the fascinating lives of the great and the good who are interred there. Many of these were the “movers & shakers” of the Victorian era who contributed to making Glasgow the “Second City of the Empire”.

For any member who didn’t manage the tour and is interested in visiting on their own, it is highly recommended.  Friends of the Necropolis also organise guided tours on certain days and information can be found on their website - www.glasgownecropolis.org

All donations to the Friends goes directly to their restoration work, which is currently the elaborately carved Monteath Mausoleum.

A Jewel of a Day

Thirty LADFAS members were privileged to enjoy the Visit arranged by Mavis Henderson. 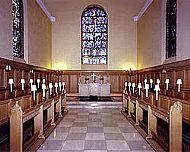 last days of WW2 and were impressed and touched by the wood carvings which reflect the life, interests and enthusiasms of the young boy Robin, and the magnificent series of stained glass windows by Sadie McLellan showing scenes from Bunyan's Pilgrim's Progress.  We were fortunate to meet Kate Gill, Group Leader of Edinburgh NADFAS Church Recorders who are recording the Robin Chapel and were interested to discover that the vases for the altar were made by Lydia Barge, formerly of Rhu. 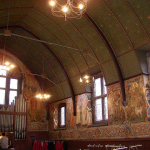 stunning murals.  First to the Song School of St Mary's Cathedral which serves as a room for choir practice where she painted the mural cycle Benedicite omnia opera, a text which celebrates the Creation and a glorious mix of imagination, realism and beautiful detail including portraits of the cathedral clergy and choristers, soaring bands of singing angels and scenes from the Old and New Testaments.

Dr Elizabeth Cumming, the foremost expert on the life and work of Phoebe Anna Traquair we arrived at the Mansfield Traquair Centre – Scotland's “Sistine Chapel” and the Jewel in the Crown of our day.  Formerly a Catholic Apostolic Church whose members anticipated the imminent Second Coming, its vast walls are entirely covered with Phoebe's murals.  The decorative scheme includes the Parable of the Wise and Foolish Virgins, scenes from the Life of Christ and the Six Days of Creation and heavenly hosts of Angels with golden trumpets and the Second Coming of Christ.  The whole effect is breathtaking, glorious, joyful and rich.