Senior pupils from Hermitage Academy paid their annual visit to our Christmas meeting. Society members were once again treated to a fascinating exhibition, showcasing diverse art works of an impressively high standard. 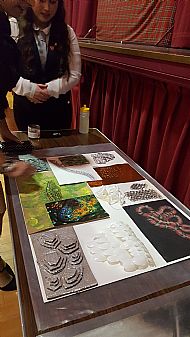 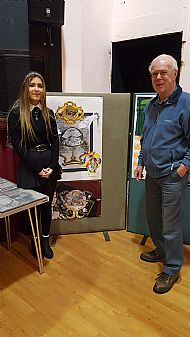 Following the success of last year’s life drawing event, a second, equally successful workshop was
held for senior pupils. Although aimed primarily at young people who are preparing portfolios for art
college applications, the workshops are open to all senior pupils studying art. As a consequence
of this initiative, life drawing workshops now take place several times a year in the Oak Tree
Gallery in Helensburgh.

Four young people from Route 81 Youth Project came with their

leader to our November meeting.They brought a storyboard showcasing the “Neon Ninja Gymathon” Fundraiser event which they devised to raise money for Route 81. The storyboard showed young people at planning meetings and designing the team T-shirts which they wore at the one day event, which involved a yoga workshop and various gym challenges. Events such as this highlight the many benefits for the young people in participating. 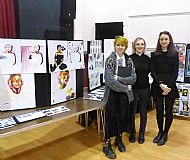 Young people at Route 81 were inspired by the mental health charity Breathing Space Scotland to run a weekly ‘Feel Good Friday’ project. This led to a wide range of individual good deeds/acts of kindness towards members of the community.  A story board display was designed and produced to illustrate the project. Representatives from Route 81 attended a meeting of the Arts Society to display and talk about their project. This is an annual project sponsored by the Arts Society. 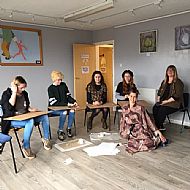 This very successful tutor led workshop took place in the Oak Tree Gallery. A group of young artists aged 16-18 enjoyed an inspirational day of drawing. The morning was devoted to life drawing with a professional model and in the afternoon students were encouraged to engage in a variety of experimental drawing activities. We hope that the success of this pilot will lead to further workshops.

We have  sponsored two local groups and exhibitions of their work were showcased  at our lectures.

Route 81, a youth group based in Garelochhead, Argyll & Bute, developed a project to create and sell 1,000 hearts to raise funds to contribute to the cost of maintaining a defibrillator in their village.

At their annual awards ceremony on 3 June 2016, the 39 young people involved in this well worthwhile project were rewarded with Saltire Award Certificates to mark the number of volunteering hours they contributed. These hard working young people also created an Art Installation for their meeting place to celebrate this project.

A representative selection of young people attended three of our lectures. They gave information to members about their work and also sold some of the Hearts. This helped build their confidence.

During the summer, a group of 16 young people created a second collage

telling the story of a year's activities as part of an ongoing sustainable project. Ruth,16, Abbi, 14, Samantha and Mason,13, attended our November meeting to present this work, to explain the story behind it and the beneficial outcome for local young people.

The following quotes illustrate the success of this project and the benefits of attendance at the meeting for these young people from Garelochhead; "The Art Project could not be better, can't wait to do it again!", and " I felt today was a huge confidence booster."

Chantelle and Jack, 17, accompanied by S.J.Williams, attended our February meeting to show members the hearts . Posters and photographs showed us the process involved with the young representatives explaining the project well.

the head of the art department, attended and impressed both with the quality of their work and their responses to members. This by now annual event is a good opportunity for the pupils to develop their inter personal skills as well as showcase their work.