This tour, organised once again by Heritage Travel was based in Madrid,  aimed to convey the cultural importance of this fascinating part of Europe.

Madrid is a wonderfully diverse and visually striking city with a compact centre featuring over 50 museums and galleries, many theatres and opera houses, and beautiful baroque and Rococo churches.

Toledo is the old capital of Spain and the influence of the successive occupations by Arabs, Jews and Christians can be seen in the varied architecture of this city, once home to the painter El Greco.

Click here for a report on the visit by Joy and Bryan Temple.

This tour, which was organised by Heritage Group Travel, 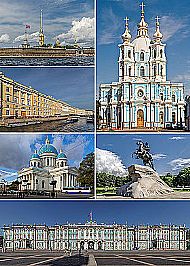 started with an orientation tour of the city focussing on architecture.  There were visits to the Peter and Paul Fortress, the Yusupov Palace and the vast Winter Palace, which houses the Hermitage Museum.  Visits outside St Petersburg  included the magnificent summer palace of Puskin and Pavlosk, while there was also be an opportunity to attend a ballet or opera.  The tour ended with a farewell lunch with typical Russian cuisine in a country restaurant.