TASLA has made  a Record of three local churches. and intends to start on St Modan's in the near future. 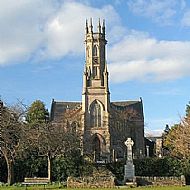 On Sunday November 27 2005 the Record of Rhu and Shandon Parish Church was presented to the Minister and congregation.  This was the first Record compiled by LADFAS, the first Record in the West of Scotland and the twelfth in Scotland.  Others include the Church of the Holy Rood in Stirling and the Canongate in Edinburgh. 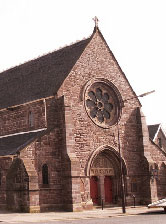 In 2006 we embarked on the Record of St Michael and All Angels Episcopal Church, the only category A listed church in Helensburgh, which has a wealth of fine decorative items including mosaics and important stained glass. This Record was completed in 2012. 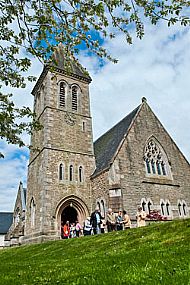 In 2013 our third Record was begun.  We are recording Cardross Parish Church, an ancient and historic parish  -  Robert the Bruce died here in 1314!  The present Church building, built in 1872, has a number of significant artistic commissions donated over the past forty years  -  etched and stained glass, Communion Silver and textiles including the internationally renowned Embroidered Panels by Hannah Frew Paterson.

Copies of the Record are deposited at

Cushions and a kneeler with the NADFAS Acanthus Logo will be presented to the three churches.

These cushions have been stitched by Margaret Robinson and Olivia Birch.

The kneeler was presented to St Michael and all Angels on Thursday April 21st 2016 following, appropriately, an illustrated talk on "Sacred Stitches", held at the church!